Look I’m from Tennessee… so seeing my hometown Titans fall short of the playoffs in the final game of the season while attending it live hurt. The AFC south teams are young and the race for the division will be another close race. Let’s take a look at the AFC South as we continue the series shall we.

Can Houston Survive the long road stretch that includes London

Watson lead the Texans to an AFC South best 11-5 last season while showing he plans to be the franchise QB. Watt and the defense always seem to be able to give the offense a chance every game. The Texans however have a tough stretch in the middle of the season. Starting in Week 3, the Texans will play four of five games — including a trip to London — on the road. That stretch will include trips to Kansas City, Indianapolis, London and Baltimore and one home game (Week 8) against the Raiders. They will be reward with 3 straight home games and have a chance to finish strong once again in a tight division.

Nick Foles takes over the helm in Jacksonville to try to help their offense get on track.

Nick Foles was shipped out of Philadelphia this off season as they decided to make a statement that Carson Wentz is their guy. Jacksonville finally realized that Blake Bortles wasn’t the answer to their question at QB and made the move to bring in the Super Bowl winning Foles. Two seasons ago the Jags looked so promising as their defense was on top of the league and they were looking to have a bright future ahead. Then this past season they just couldn’t seem to get out their own way and not only missed the playoffs but found themselves at the bottom of the division. The jury is still out on their offense, as I need to see if they say healthy at RB, yes you Fournette. 8-8 would be an improvement over last year but we will see how Foles can improve the reeling Jags.

Luck says he’s feeling stronger than ever, which means trouble for secondaries

Wait what?!? Justin Houston is on the colts now?! The Colts have agreed to a two-year deal worth $24 million with Houston. The Colts have landed their best pass-rush threat since Robert Mathis. He will be a problem for teams this year. However he just turned 30 and we know that’s not young in NFL years. When it comes to the Colts it comes down to one thing, health. Luck needs to be on the field, the O-Line needs to be healthy and keep him upright. If all these things are able to take place, look for the Colts to do nothing but improve this upcoming season.

Tannehill says the move to backup has been tough, but will he stay as a backup? 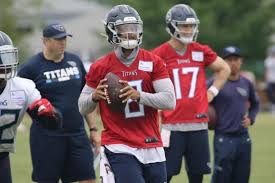 “It’s definitely tough at times,” Tannehill told reporters. “But Marcus is great to work with. The staff here, Marcus, the quarterback room is really great, and when you work with good people — great people — and you’re all aligned in this thing together trying to win football games, it definitely helps with that transition. But there are some things that are tough about it, but kinds of goes along with it.” Marcus is still the starter according to coaches but obviously if he doesn’t perform it’ll be interesting to see how the pressure gets on the young QB since some of the city believes he’s not the long term solution for the Titans. Expectations are big for the Titans has Henry is looking for a big contract so he’ll be running harder than ever and the young receivers look to improve over last year. The defense is strong and has long as the secondary stays healthy they will keep the team in the same and force turnovers.

The AFC South race will be tight just like last year. Everyone is young and improving. I’m looking forward to going to Titans games this year for sure.

Next up on the Preview series… AFC East