Look Listen….. I’m all for the nostalgia of baseball being America’s game but let’s be honest here, Football is KING! 50% of baseball viewers are 57yrs old or older. Of course we all know it’s most due to the lack of attention span of us Millennials but I digress. Let’s discuss some storylines of this upcoming season in this special series:

Let’s start with the AFC North

Will the Cleveland Browns pick up where they left off?

Baker and crew have added more weapons in Odell and Hunt to make them an even legit offense. The expectations are high in the dog pound for the first time in a long time as the over/under for wins for the Browns are projected at 9 games. I can’t imagine a team having more swagger with egos like Baker and Odell on the same sidelines. The question is can they coexist while learning how to gel, or will they get in each other’s way?

How will the Steelers do without the playmakers Brown and Bell?

Brown and Bell were traded away this off season

Big Ben is without his two playmakers this year, however still has JuJu, who was the teams MVP this year and plans to take over the role as the man in the Steel City. I was project a dip but you never know with Pittsburgh and I’m sure they’re happy to have less drama for once in an usual pretty strict ruled organization. It’s all on Big Ben and JuJu now and the fan base expects them to perform.

Flaco is out and Jackson’s time is now

Lamar Jackson has the command of the offense in Baltimore as Flaco is out. Jackson is one of the most fun players I’ve ever witnessed with my own eyes since Mike Vick. The addition of Ingram will add some balance and muscle and Roberts at WR will stretch the field. The top rated defense however, lost some big pieces of leadership in Suggs, Weddle, and Mosley, all of which they will play this year. The addition of Thomas will be a huge help in that issue if he’s 100%.

Marvin Lewis at being 0-7 in the postseason is finally fired. Zac Taylor takes over with a tough schedule this year 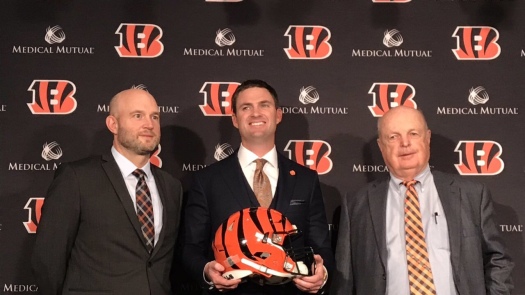 Zac Taylor takes over a new chapter in Cincy

Welcome to the NFL Zac Taylor! Taylor and the Bengals start their season at CenturyLink Field in Seattle, one of the loudest in the league, then week 3 travel to Buffalo, and to Pittsburgh week 4 for Monday Night Football. They haven’t beaten Pittsburgh since 2015. They also have the luxury of playing the Rams in London, they’ll face the upcoming Browns twice, and oh the defending champ Patriots in December. Yikes! 8-8 may be a win for these guys.

According to the experts it’s Cleveland’s division to lose, which is weird to say out loud. Cleveland, Pittsburgh and Baltimore will battle it out for the division. This may be the tightest race to see who gets to take it.

Next up in this series; AFC South